The warrior Dace and his young charge, Yushuv, were already on the run from the inquisitors and huntsmen of the Realm. Now, in the wilds of the Scavenger Lands, they face an ageless, relentless enemy with only the Unconquered Sun to help them

In more dire straits still, the priest Eliezer Wren braves the Underworld itself to escape the Prince of Shadows. But dark powers await him there, determined to bend him to their will – or break him if he refuses. 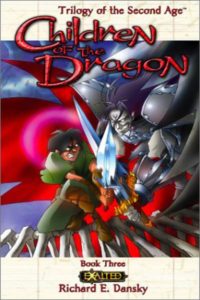