…the cover for the new edition of Firefly Rain, by the mighty Lynne Hansen, is gorgeous. And special thanks go out to the omnitalented Bridgett Nelson for editing the manuscript, all 103K words of it!

It is my absolute pleasure to announce that the super-talented Lynne Hansen will be doing covers and layout for new self-published editions of my first two original novels, Firefly Rain and Vaporware!

My old White Wolf running mate Ian Lemke is Kickstarting a tabletop RPG of American Gothic Horror called Nevermore. You can find the details here. And among those details is a stretch goal whereby yours truly will be writing some short fiction for the game. So if you’re a role-player and love horror, check it out!

Once upon a time, I published a novel called Firefly Rain. It was my first original novel – I’d published four previously as tie-ins to a couple of White Wolf games – and I was and am very proud of it. It came out as the lead title for the short-lived Discoveries line from Wizards of the Coast, and garnered some good reviews, most notably a starred review in Publishers’ Weekly and a Booksense pick. It even sold reasonably well, but Wizards shut down Discoveries before we could do a paperback edition. Gallery Books was kind enough to pick up the rights for a paperback edition, and that was that.

As of today, I have the rights to Firefly Rain back. With luck, that means I’ll be doing something with those rights and putting out a new edition. I don’t have a timetable, but for the first time in a long time, it feels like things are moving in a good direction.

Like I said, I’m proud of the book. It’s a personal story about the promises one makes to family and the price of not keeping those promises. If you’re looking for blood and guts, you’re not going to find them here, but if you want a slow-burn ghost story, you might enjoy it. The book was inspired by a trip to my ex-wife’s family farm and a moonlight walk, where the line of shadow at the property line was sharp enough to cut with. From there I got the image of a farm bereft of fireflies when all the land around was lit up, and that turned into the novel.

So wish me luck. I’ll keep you posted.

Like your horror cosmic? Want to check out my story “In the City of the Idol”, which is me doing my best Clark Ashton Smith impression? Then check out the May issue of Cosmic Horror Monthly, available now at their website. And look, they even put my name on the cover! The extreme horror anthology Counting Bodies Like Sheep from Evil Cookie is now available in hardcopy and eBook formats! Featuring a veritable who’s-who of extreme horror, it also contains my short story “The Taste of It Fresh”, which is by far the grossest thing I’ve ever written. I’m pleased and proud to be a part of this one, and you can order it here. 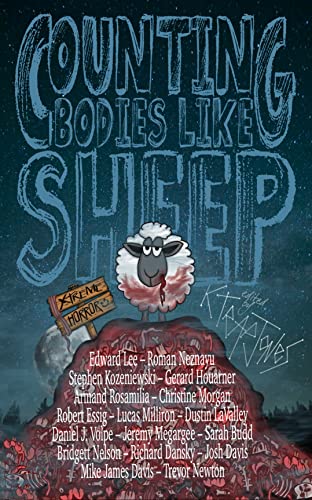 Yes, it’s true – the extreme horror anthology Counting Bodies Like Sheep, which includes my story “The Taste of It Fresh”, is available for preorder. It’s sick. It’s twisted. It’s horrifying. And I’m happy to be a part of it.

Pleased as punch at the cover reveal for the upcoming Evil Cookie anthology COUNTING BODIES LIKE SHEEP. It will include my story “The Taste of It Fresh”, which has more fluids in it than any other story I’ve ever written.