Jay Posey is a veteran of the video game industry with credits on titles as diverse as Ghost Recon Future Soldier and Star Trek: Bridge Crew. He’s also a multitalented gentleman, and has published seven novels, including the Duskwalker Trilogy and most recently, Every Star A Song. He and I have worked together for many years, and I am pleased to say that he is still talking to me after all this time. And like his character, Jay is hyper competent at anything he sets his mind to. Now hear what he has to say in Five For Writing:

1-You tend to write in series instead of standalone books. What’s the appeal of a series to you?

Hmm, besides the comfort of knowing I’ll get paid for more than one book? I think the main draw of writing a series for me comes from how it gives me time and space to reveal world and character details in a way that feels organic.

I often have a complicated knot of ideas that I’m trying to untangle and explore in my books, and I don’t necessarily know where any of it is going to take me. There’s always a temptation to firehose my readers with information that isn’t necessarily relevant to the immediate story but that my brain really wants to get out on the page so it can stop thinking about it.

My first series (Legends of the Duskwalker) is probably a good example; the main character Three has some 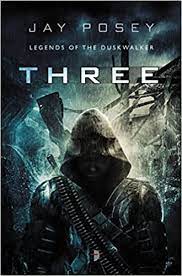 unusual traits that make him unique among everyone else he interacts with, but it isn’t really until the third book that it becomes clear why he is the way he is. I kept trying to find a place to explain it all in that first book. There just wasn’t space. It wasn’t relevant to the story that was unfolding, and the amount of context that readers would have needed for it to make sense was just too much to fit in as an information dump. But after a couple of books’ worth of exploring the state of the Duskwalker world, I felt like readers had lived in it long enough that the third book could reveal that background in a natural way that was integral to the story instead of an “As you know, Bob, Three is special because …” kind of thing.

Knowing that I don’t have to rush into anything is helpful, though it has occasionally bitten me too. I left some loose ends in my Outriders series that I still haven’t had the chance to tie up (yet). (Which is probably why about 98% of email I get from readers is of the “When is the third Outriders book coming out?” variety.)

2-You dramatically expanded the scope of your writing for your last two novels. What led to that? 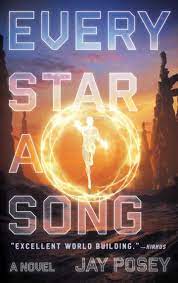 Mostly a direct challenge from my agent, the esteemed Sam Morgan. After the Outriders books, when we were discussing what to tackle next, he said he’d really like to see what I could do on a more epic scale. My first two series were focused on small groups of people, so when Sam said “how about more epic”, I went from “small group with personal stakes” to “galaxy spanning empire with the fate of the human race in the balance”. It was quite a challenge for me and really stretched me creatively, but I’m really glad that Sam pushed me to give it a shot.

3-Your debut novel, THREE, fused elements of westerns, horror, cyberpunk and post-apocalyptic fiction. How did you arrive at that combination?

I had been working on a different novel off and on for a few years and was having trouble making any headway. At some point, I finally realized it was because I wasn’t a good enough writer at that point to accomplish what I wanted to with it, so I decided I’d just pick another idea and make it a goal to finish it, without really worrying about whether or not anyone else would ever want to read it.

So I think the weird combination of elements grew out of the fact that I was writing THREE for myself first and foremost, and I just decided to build a world where I could include all the things that I thought were cool. I remember thinking about George Lucas and Star Wars: A New Hope, and how watching that movie, you can see his love of Westerns, samurai movies, hot rods, and WW2 dogfights all happily co-existing together. I think I just figured if I wanted to write a book about a cyber ninja gunslinger trying to help a dying woman and her child cross a wasteland filled with bad people and scary critters who only come out at night, there wasn’t anything stopping me. 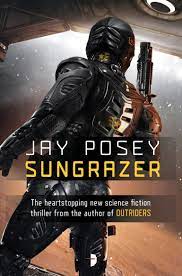 4-The defining trait of many of your characters is utter competence. What’s the appeal of writing
about characters like that?

I’m secretly envious of competent people. Life must be so much easier for folks who have some idea of what’s going on!

There are a couple of things in particular that appeal to me about writing hypercompetent characters. First, I think it’s interesting to explore the humanity that exists even in people that seem so different from the rest of us. I’m pretty sure my background in writing for Tom Clancy video games has had a hand in that. I’ve been fortunate to have the opportunity to sit down and talk with a lot of combat veterans from the special operations community, and it’s really impacted how I view members of our armed forces who serve in those elite groups. I used to imagine that they were all just a different kind of human from the rest of us, more like superheroes I guess. The fact is that they’re just people too. So that’s always been interesting to me to explore.

Secondly, I think it also has something to do with the kinds of scenarios I can put those characters into, and still have it seem plausible that they can find their way out. I feel like I can barely navigate a grocery store successfully these days, so it’s fun for me to be able to drop these characters into extremely challenging circumstances and know that they can handle it.

5-What’s the book you’ve always wanted to write that you haven’t written yet?

Probably that very first novel that I worked on for so long that has still never seen the light of day. It’s a fantasy setting, but not unlike the Duskwalker series in combining many different elements that I just find interesting personally. With seven novels under my belt now, I feel like it might be about time to circle back around to it and see if I’m ready to tackle it or not.