Author, podcaster and gamer, Thomas R. Clark is a man of many talents. In addition to published works like The God Provides, he anchors the metal-and-horror podcast Necrocasticon. So let’s throw the goat and let Thomas answer in his own words 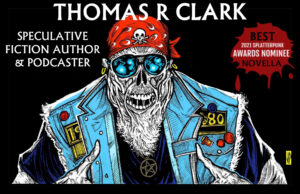 My two favorite niche genres of entertainment. And they are niche, no matter how rabid and vocal the fan bases are for both. They are linked through iconography and themes, mostly.One can’t think of Iron Maiden without also seeing their zombified mascot, Eddie. Many metal bands use imagery typically associated with horror – Type O Negative, for example, or Ghost and their Satanic pope character Papa Emeritus – hell, even Black Sabbath’s name comes from a Boris Karloff film. Not to mention one of my favorite horror novels, The Scream from Skipp & Spector, which is a perfect blend of this.

2-What was the experience of writing your first novel like?

Do you mean the one I just wrote? Or the two I wrote between 2015 and 2018 that will never see the light of day cos they are/were nothing but a collection of scenes and awful? Well, wait, that isn’t all true. I’ve cannibalized and re-written portions from both into other pieces. For example, the opening chapter to Whirlwind was slightly modified into the short story “Chirp” you can find in my debut collection, A Book of Light and Shadow. The protagonist of the same book, a private detective named Dianne Brighton, was reimagined as the protagonist of my WIP, The Witch of November. I write slowly, and writing a full length novel is an arduous task for me. My longest piece of published fiction to date is The God Provides, but that is technically a collection of four novelettes. The Death List, my longest narrative piece in print, is just under 40K. Now, the one I just completed, Summerhome, is my first full length commercial novel, no disrespect to F. Scott Fitzgerald. I found the process with this to much easier than I thought it would be, as I was taking what I’ve learned with my prior pieces and applied it to this. I’m in the midst of a rewrite before going to my editor.

3-What have you learned from the process? 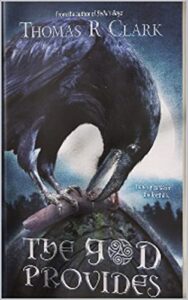 I learned your first book will be awful, and likely your second book, too.But they need to be awful. I’ve learned writing books is a lonely trade, and the legends of writers having substance abuse issues are no joke. It’s easy to tip a bottle or light up a smoke when you are alone as much as a writer is.

4-What’s the most metal thing you’ve ever written?

Thus far, it’s Bella’s Boys. The Death List is pretty metal, too, but Bella’s Boys is so much more than a cosmic horror novella. It has meta-layers, making it everything that is metal and Rock-n-roll. For example, the chapters indicating the date, time and snowfall totals – those represent the time signatures of a song on an album. The book is an album in print, with each chapter being a new track, or song in presented in narrative prose. 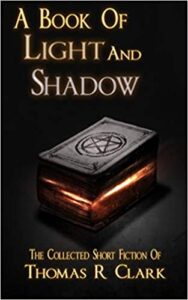 5-How does your podcasting relate to your writing?

I went to college for broadcasting and journalism, so the podcasting is a natural extension of that. Podcasting, ironically, has led me to my writing career, though. I’m glad I’m doing this now, and not thirty years ago. I imagine the ME of that era wouldn’t have been very popular with the community as a whole, due to my immaturity and rampant, out of control ADHD. I’ve only learned to manage over the last decade – and much of this is a result of the structures I’ve had to build in my life to produce quality creative content. I worked in sales for 25 years nad never achieved the amount of understanding for my trade as I have with writing fiction.

Sometime around 2008 or 2009, my buddies and I started a fan podcast of a regional professional wrestling promotion. Interviews I did during this time period assisted me in landing a podcasting and journalism gig at an online entertainment news site similar to Ain’t It Cool News, called This Is Infamous. During this time period, a peer with a small press printed a series of comedy-genre pieces I wrote over the years. My coverage of horror films and the horror based fiction I wrote landed me in the HWA, which I joined to find mentoring. During this time, I started the Necrocasticon Podcast, after leaving This Is Infamous. Eventually, I was given a mentoring spot with Monica S. Kuebler at Rue Morgue Magazine, which led to me covering Scares That Care for the magazine. And there, after meeting many of the creatives who inspired me, like Brian Keene and Tom Monteleone, I discovered I wanted to write fiction. So podcasting has had a drastic impact on my fiction, without it, I don’t think I’d be doing what I’m doing today.

Many thanks to Thomas for bringing the thunder to this week’s post. You can find him online at his website, or on Twitter. And check out the Necrocasticon if you get a chance!

Next week is a special treat for me, as I bring you an interview with my long-time coworker and friend, the man who is Vampire: The Masquerade, Justin Achilli. See you then!