Justin Achilli and I go way back. Like, to the mid 90s at White Wolf way back. It was a pleasure to work with him then, and it’s been a pleasure to work with him in his time at Red Storm. He’s one of the sharpest game designers I know, as well as an excellent writer and editor, and a thoughtful, eloquent advocate for games. Here he is now, the man who more than anyone embodies Vampire: The Masquerade – Justin Achilli. 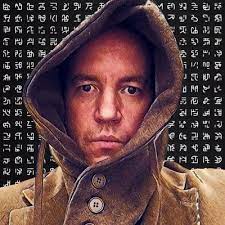 1-You’ve been involved with Vampire: The Masquerade for over two decades. How has it changed in that time, and how has your approach to it changed?

For the longest time, Vampire (and all of the World of Darkness games) were made by a company that was a physical book publisher first and foremost. It needed to print and sell books to survive, so a lot of what went into the games served that end: Print stuff with a perceived value and sell that. We were writing and developing sequential periodicals as much as we were writing and developing games. Things like “metaplot” and “canon” emerged less from an intentional continuity and brand-building, and more from survival instinct.

Now, though, the company that owns the World of Darkness (Paradox Interactive), isn’t a physical book publisher at all. So my work on Vampire and other titles is refocused on building a sandbox in which people can tell their own stories rather than printing some-thousand words of plot advancements.

2-You’ve worked in both tabletop and video games. What did you carry over from one to the other?

Overall the thing that I find most important is to respect the player’s time. Audiences have a huge amount of options in terms of entertainment, so I think it’s important to realize what your game offers, whether it’s a TTRPG or a video game or whatever, and deliver on that promise.

I had been working on MMOs a while back and it used to bother me how a lot of MMO marketing was “you can be anything you can imagine in this enormous living world!” but their gameplay was built around three or four very distinct classes or roles and combat quests. That always seemed really disingenuous to me. Better to have a very limited scope and help the player tell the best story they can within that scope than to try to tick every box and deliver adequately on only a few of them. Pendragon is an amazing TTRPG, and characters are comparatively very limited in what they are: Arthurian-era, mostly knights. And look at, say, Stardew Valley — it doesn’t have one tenth of the feature list of, say, Star Citizen, but it’s made millions of people very happy by letting them tell a very distinct kind of story, and it doesn’t pretend to do anything else.

I think that’s the most important part. Let the player tell the story and live the fantasy you’ve promised to them. Games development is project management, so your resources should be scaled and devoted to fulfilling your promise.

Not a sexy answer, I suppose, but a good one, I think.

3-What do you feel is unique about game narrative, and have we been reaching its full potential?

The big difference between games and “one-way” media is the interactivity. In a game, the narrative is helping the player tell the story, so if the story relegates the player to making insignificant choices, it’s telling them that they don’t matter, that what the story “is really about” can happen without them. That does a disservice to the player, who’s playing to see the outcomes of their actions, to make choices and learn what those choices effected.

I don’t think we’re at the point of realizing the full potential there, and I think we’re still a distance away. Look at how long writing as a craft has existed, or creating visual art, or making music. Compared to those media, video games are in their infancy, and they’re a unique blend of all of those things and then some. Some of what’s limiting us is technical or technological — we can’t yet have an AI “game master” that’s as versatile as a human one, and we can’t ship an infinitude of digital assets to visualize or realize what a human game master can describe. But some of our limitation, too, is commercial, in that it’s really expensive to make games and the people funding them want to recoup their costs, so the expenses of risk-taking are much more controlled than in, say, an individual’s effort to tell the story that they’re burning to tell.

4-How do you think game design should be used to tell stories?

I think of game design as the “toolbox” the player has. A game effectively proposes a problem or a series of problems, and the design defines the parameters by which the player can attempt to solve those problems. So there are really two stories to every game (and sometimes they overlap very closely): the story of the player playing the game, and the story events that contextualize the game itself. The player’s story, and the world story that includes the character the player is portraying.

I think this is the part where I’m supposed to bring up the “does Tetris have a story?” exercise 😉

But seriously, I like the definition of a game as a series of interesting choices. “What happens when I do this?” is the source of myriad stories. They don’t all have to be epics or infinite. Some stories happen in a moment’s time.

5-Do you prefer open-ended or linear game narratives, and why?

As a personal preference, I enjoy open-ended narratives, because they make me feel more like I’m in charge of my own destiny. Especially when I’m able to create my own character, I feel like setting my own goals and realizing them is part of that open-endedness.

Which isn’t to diminish linear game narratives, of course, and I’ve worked on many of these. In complement to the above, when I’m playing a specific, named character, I tend to appreciate linear narrative smore, because I buy into the story that this is that character’s story and I’m helping realize it, as the player.

In the end, it has a lot to do with the promise that’s being made to me, especially in game worlds that are part of franchises. In a Star Trek game, I want to boldly go! But I also accept that I’m probably going to end up in conflict with the Klingons at some point. “Linear” doesn’t have to mean the player is resistant to being directed toward an outcome. If it’s part of what you buy into when you undertake the narrative, it’s reasonable to have some expectations.

Huge thanks to Justin for taking the time to sit down and answer these. You can find his wit and wisdom on Twitter, and in the continuing output of World of Darkness books.

Tune in next week for another interview!