It is my pleasure to reinaugurate the Five For Writing interview series.

First up is James A. Moore. Some of you may know him from his work on the original World of Darkness setting. Others may be a fan of his horror, where his Jonathan Crowley novels have attracted both fans and critical acclaim. Then there’s his grimdark fantasy series, The Blasted Lands, which introduced him to a whole new audience. Most recently he edited Halloween Nights: Tales of Autumn Fright, a horror anthology with a murderer’s row of contributors. James was kind enough to sit down for his five questions. Without further ado, here’s James A. Moore’s Five For Writing: 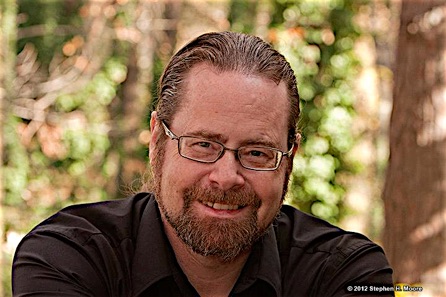 1-You write a ton of horror, but some of your most successful work has been fantasy. Why the switch in genres?

Genres are a marketing thing. I don’t much care about marketing, I care about telling a story that I would enjoy reading, and sometimes that takes me away from Horror and over to science fiction or fantasy. Sometimes it means mixing my genres like oil paints. Wherever the story wants to go, I’m perfectly willing to follow.

2-What does fantasy offer you as a writer that horror doesn’t?

There are certain rules to horror. Mostly it takes place in the modern world. Fantasy can take place in entirely different worlds. The best example I can give for that is the TIDES OF WAR series, where I built an entire pantheon of gods, and an entire continent of countries, and then merrily set about laying waste to everything. Really, it is horror, but with a different setting.

3-You’ve just edited an anthology for Halloween. How does editing compare to writing for you?

You have to look at editing as a collaborative effort. There’s a balance you need to achieve between 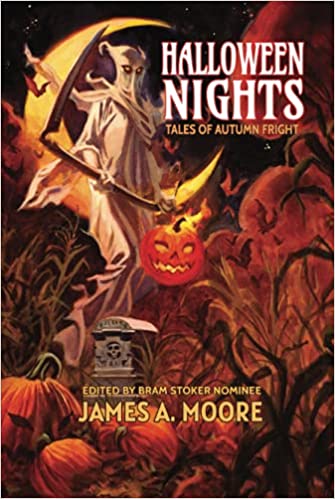 the stories, the theme, and the authors. This was a Halloween anthology, so the theme was easy, but as with ay collection you want to avoid repetition, and you want as many original voices as possible. Also, editor or not, you don’t have as much control of the work as an editor. So instead of just relying on my words, I’m relying on fifteen different authors, all of whom are doing their own thing. After I get the stories I can make suggestions but really it isn’t about what tales I want to tell, it’s about how I can put the moving parts together. It’s a very different mindset and challenge and I love it.

4-You’ve done a fair bit of collaborative writing. What appeals about that to you, and how does your process work?

The process is different with each writer, but at the end of the day, I liken it to getting together with a friend and playing in a sandbox with each other’s toys. We are sharing the wonder, the challenge and the fun of each other’s imagination. Usually, you have to establish some rules up front, and you have to genuinely enjoy the other person’s work. It can also be a challenge collaborating with someone who works at a different pace than you do. Working with Charles Rutledge is normally a hoot, because he writes just as fast as I do.

5-Your signature character is Jonathan Crowley. What inspired his creation, and what do you think is his appeal?

I’ve scratched my head about that a few times. First, Crowley’s personality is a lot like mine, but without a censor button. He says and does things that I would never do in real life. But I’ve thought about a number of them often, and I realized that actually acting the way he does would likely get me in hot water. It’s fun to play around with that sort of personality, but it’s not always wise in the real world. I tend to play it safer than Crowley because I am not immortal, I do not heal bad wounds as quickly, and frankly, my mother raised me not to be that rude. As to his appeal, I suspect it’s exactly the same thing. He does and says what a lot of people would LIKE to say but never do. I had a few women tell me over the years that they find him incredibly sexy and I shook my head and wondered why. He’s a complete bastard most of the time. I expect the world works differently when you’ve been around long enough to no longer be threatened by most people and their attitudes. Crowley is an immortal. There’s very little he hasn’t seen or done, and most of the people he meets just annoy hjm.