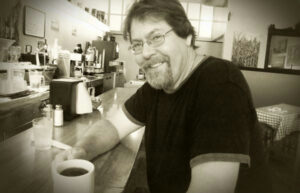 Alex Bledsoe’s Tufa novels are some of the finest modern fantasy out there. If you haven’t read them, they’re a treat and you owe it to yourself to pick them up. He also was part of the collective that wrote for Transgressive Horror: Reflections on Scare Films that Broke the Rules, which is where our paths crossed. He was kind enough to sit down for five questions about the Tufa novels, vampires in Memphis, and why all horror movies are transgressive. Without further ado, I give you Five For Writing with Alex Bledsoe.

1-What’s the appeal of transgressive horror films for you?

All good horror films should be transgressive in some sense; it’s in their nature. The point of horror is to expose the viewer to images and ideas they would never encounter elsewhere, and to show the embodiment of those images and ideas as realistically as possible. The German cinemagoers lucky enough to see Nosferatu on its first release would have considered the vampire as a transgressive figure, a visual representation of something that broke so many social rules.

Really, a non-transgressive horror film can’t be very horrifying, like the endless PG-13 teen “horror” films released since the turn of the century. I’ve always thought all horror films should be rated R, because even if it’s *not* overtly violent, that threat should hang over everything. A PG-13 rating is a comfort blanket, and even if some of them can be quite good, they’re never truly horrifying.

2-What impact does your home base in the Smokies have on your writing?

Technically I’m from the other end of the state, close to Memphis, but my dad’s family is from the Smokies, and I’ve visited there many times. I’ve used the South as the setting for both of my past horror novels, as well as my upcoming one; although I’ve lived other places (I’ve been in Wisconsin for the past 18 years), the south is the one I most deeply understand. I think that’s why I keep returning to it as a setting; I don’t feel qualified to write about anywhere else, unless it’s a total fantasy setting.

3-You’ve got a series of vampire novels set in Memphis. What inspired you to turn vampires loose there?

It’s a city I know, or rather used to know, pretty well; my novels are set in the mid-70s. Plus it’s not over-used in horror fiction like, say, New Orleans. Memphis has a unique history, and since the novels deal with racism as well as vampires, it seemed like an ideal place to set it. I chose the year 1975 because it was before the publication of Interview with the Vampire, and thus was still the era when vampires were scary.

4-Your Eddie LaCrosse series is fantasy noir. Why mix those two genres?

I wanted a way into a fantasy story that allowed a greater identification with the characters than I was seeing in the fantasy I read: too many unpronounceable names, too much emphasis on world building, not enough emphasis on character. I thought that the works of writers like Chandler, Parker, and Vachss did a great job of also taking you into worlds (a.k.a., crime) you might never visit, but they did it with an immediacy I wanted to claim. Plus that tone made it more fun to write.

5-The Tufa novels feel deeply personal. Where did they come from, and will we see more of them?

They grew out of stories I heard from my dad, about a strange group of people who lived in the Appalachian Mountains. The part that intrigued me was the idea that these people were already here when the first European settlers arrived. That was the starting point, but of course I made up my own group so I could give them a magical backstory.  I felt six books was enough to say what I wanted, and anything past that I’d be restating things. But who knows? If I get a new idea, and there’s a publisher interested in it, it could happen.

Many thanks to Alex for his time and for gently correcting my mistake about his home base – that’s what I get for reading an author bio too quickly. You can find him online at his website, and on Twitter.
Next week I ring in the new year with an interview with game writer Jesse Scoble! Until then, have a happy New Year!
Posted in Five For Writing, Interview and tagged Alex Bledsoe, Eddie LaCrosse, Five For Writing, Transgressive Horror, Tufa, Vampires in Memphis.