Robert Ford is cooler than you. That’s OK, he’s cooler than just about anybody, In addition to having written genre masterworks like The Compound and The Last Firefly of Summer, he’s collaborated with John Bodden on a series of novels and he’s widely known as a superb live reader. It was my great good fortune to get to hang out with him during the recent Scares That Care AuthorCon, and to get him to agree to sit down for five questions. So here they are, Five for Writing with Robert Ford. 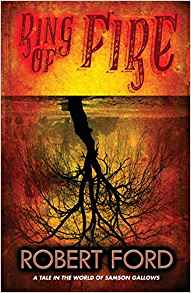 1-You’ve described your new book as “brutal”. Why go there?

When I started writing Burner, I was on the verge of completing two projects and hadn’t decided what I was going to work on next. I sat down, flipped through my idea notebook, and came across several things I knew were novel-sized concepts. I wrote some notes down on each, but with Burner, the notes grew and grew until I’d written down about fifteen pages of material. It (no pun intended) ignited something and the next day, I became a man obsessed. I generally am not a very fast writer, but I wrote the first draft of Burner in a month. At times, it felt like I couldn’t possibly type fast enough to get the words down. The “brutal” part of the novel…it came with the territory of the novel’s content, and even so, I cut about twelve-thousand words from the draft because it felt “too extreme”, even though it was based on real case studies I read when I was doing research.

2-You’re renowned as one of the best readers in the business. What’s your secret?

I have been lucky enough to witness some of the best readers when I was first starting out, and not long after, witnessed some readings that were quite the opposite. I suppose I paid attention to the good and bad and began applying that to my own readings. And practice. Practice, practice, practice. Listen to your voice and how it projects, the cadence and rhythm of words. Plus, it helps to love doing live readings, and I always have.

3-You’ve notably collaborated with John Boden on Cattywampus. What’s your process for 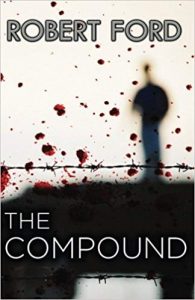 collaboration, and is it easier or tougher than writing solo?

Yeah, John and I worked together on Rattlesnake Kisses, Cattywampus, and are finishing up Black Salve. For us, we start with a general core of an idea, and then dive right in. We don’t outline and though we occasionally touch base on the storyline to maintain overall direction, we pretty much throw a chapter or two at each other, and then take turns. It’s an absolute blast and sometimes we’ll throw each other challenges, but it’s all in good fun. I can’t say it’s tougher or easier than working solo, but we’re both having a great time doing it.

4-You mention on your web page that your stories can make readers cry.

Do you prefer that or horrifying them? I used to run my own advertising agency for years, and when I was developing campaigns, one of the things I always focused on is making sure I hit an emotional nerve or it falls flat. I feel that way with my written work as well. So pulling their heart strings, and scaring the hell out of them right after makes a good pairing for me. I also think humor and horror are great mates as well.

5-What’s your favorite book that you’ve written, and why? 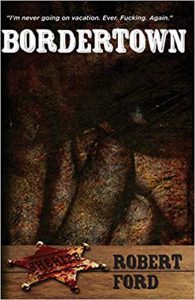 I’m very proud of Burner, because it is such a very different novel for me and seems to be resonating with readers in such a great way. I have a supernatural novel out on submission called Dead Pennies that I think is going to shake readers up and make them sleep with the lights on. But my favorite is the one I’m working on now, titled Domino. It’s early, but this “feels” big, and I’m forcing myself to slow down so I can do the story justice. Everyone will be hearing a lot more about that soon.