Mur Lafferty needs no introduction, but I’m going to introduce her anyway. The award-winning host of the I Should Be Writing podcast, she is also the proud owner of an Astounding Award and a noted editor as well. From the humor of the Shambling Guides to the deep space thrills of Six Wakes, she has been a versatile and skilled storyteller. And now she’s consented to answer five questions. Without further ado, here’s Five For Writing with Mur Lafferty:

1-You’ve won a giant pile of awards for your writing and podcasting. Where do you keep them all?

You’re setting me up for a massive hubris fall, aren’t you?
Back in 1998 when my husband and I bought our house we discovered a corner at the top of the stairs that jutted out, creating a small, pleasant shelf. I told Jim that it was the “hugo shelf.” Did I ever think I’d actually put one there? Heck no. But there it sits now, with some other awards around it and hung on the wall above it.

2-Six Wakes is probably your most critically acclaimed work. What was the inspiration for it?

I love stories where people are deep in the void of space. I had been wanting to write a generational spaceship story, but unlike others I had read, I didn’t want the people aboard to gradually lose their memory of why they were there, or even knowing they were on a ship. So I tried to figure out how I could use the same crew generation after generation without bringing in space elves or space vampires.
Then, while playing the spaceship sim game FTL, I noticed the cloning tech that you can put in your ship would not clone a crew member to make more of them, but only cloned them when they died, so cloning was a way to boost immortality. I hadn’t seen cloning treated like that before, and it got me thinking. Eventually I put the “cloning to live forever” idea with the “same crew drives the starship” idea.

3-You did the novelization for the Han Solo origin movie. What was it like to take on that challenge?

It was exciting and a huge honor. People think that the novelizations are just churned out retellings with deleted scenes, but more often than not, those expanded scenes were added by the novelist. For Solo, the scene where Han and Qi’ra hide among in the vat of eels was a deleted scene, but the scenes of Chewbacca taking over Lando’s bathroom (and his rare hair products), and the real reason L3 consented to upload to the Falcon, that’s canon that I wrote.
I discovered partway in that the novelist has a unique opportunity by presenting a different point of view. I was trying to figure out how to write a scene that had already been written in the script, and then written in the middle grade book (which was nearly finished by the time I started the adult novelization). Every character does the same things in all three tellings, so how could I make mine different but still the same? I realized presenting a different POV would show the expected scene, while making it feel new and presenting new information. 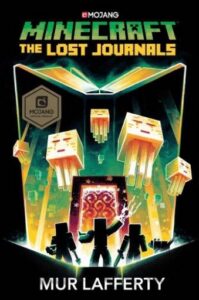 4-You’ve also done a Minecraft novel. How did you come up with a story for a game that doesn’t really have a story?

I get asked this a lot! Minecraft was super easy to write for specifically because the game doesn’t have a plot. You can put whatever story you want in Minecraft with one overall rule: the story must follow the rules of the game. I was constantly checking what items or food could be built with what materials, what monsters were where, etc. My biggest hurdle was that I wanted the mysterious journal writer to be terrible at mixing potions, so I had to look into potion mistakes more than potions that helped. 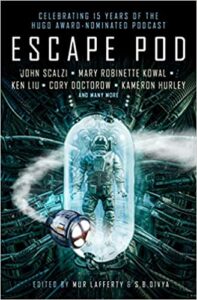 5-You’re an award winning podcaster. How does the podcasting intersect with  your writing?

I wouldn’t have the career I have today without podcasting. Being one of the first in the space allowed me to build an audience and to interview authors and network (I had no idea I was doing the networking thing, fwiw). I started publishing my own fiction via podcast and I started knowing more and more people at conventions as I set up interviews. Those two things finally helped boost my career toward getting published.
I’m not saying I wouldn’t have eventually been published otherwise, but I met my first editor while I was in line for a drink at a private party. I had gone to the private party as the +1 of the writer I had interviewed earlier that day, and he was at the con alone, so he offered me his ticket. Networking is like being tall and playing basketball. Can you build a career without networking? Sure! Does it give you a boost if you can network? Definitely. This is why I encourage all baby writers to get to cons, or at least virtual cons, as soon as they can (taking into account pandemic, money, bandwidth, etc.)
Huge thanks to Mur for sitting down for these! You can find her and her multitudinous projects online at the Murverse.
Posted in Five For Writing, Interview and tagged Five For Writing, I Should Be Writing, Minecraft, Mur Lafferty, podcasting, Shambling Guides, Six Wakes, Solo.