Bill Bodden says on his website that he likes really nice cheese, so of course I’m going to like him. He’s also an accomplished tabletop RPG writer with a foot in the fiction world, and we’ve shared a table of contents twice, most recently in Transgressive Horror: Reflections On Scare Films That Broke the Rules. So without further ado, here’s Bill Bodden: 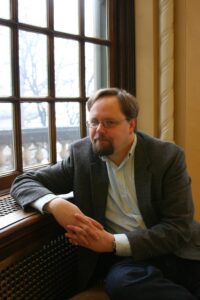 1-What’s interesting to you about transgressive horror?

2-We shared a table of contents in the anthology HAUNTED. What inspired your story there?

The Original Ghostbusters film was my inspiration for my story “A Quiet House in the Country”. I wanted to write about people doing serious investigations of hauntings using tools and technology that actually exists – not done for laughs. Lo and behold, Reality TV took that idea and ran with it, and the various ghost hunter shows on several networks have been very popular for years now. 3-You’ve written for a wide variety of tabletop games. What’s your favorite and why?

My favorite to play is Charette and Hume’s Bushido. It uses a system very similar to D&D, but I love the setting of mythic/feudal Japan. A VERY close second would be Call of Cthulhu. As far as writing for a game, I’ve enjoyed writing for D&D in the Scarred Lands setting. I appreciate the world-building that’s been done there. I’ve also enjoyed writing for Onyx Path in the World of Darkness Universe. Next up, I’m hoping to have some community content available for Call of Cthulhu in 2022.

4-What does someone going into tabletop game writing need to know?

Two big things. First, the pay is low, and the vast majority of contracts are work-for-hire, which means once you get paid, you don’t own the rights to anything you’ve written on that project. Also, no royalties – you’re paid a lump sum upon completion, and you’re done. One expects low pay on first starting out, but the problem is it doesn’t improve much.

Second, you’re writing in someone else’s world: their world, their rules. You have to take constructive criticism well in any situation, but in game writing, you need to not love your baby so much that you’re unwilling to make changes that are required of you.

5-You’ve done both game writing and fiction. Which do you prefer, and why?

It’s a tough call. I enjoy gaming, and when it’s my turn to GM for our group, I like to write adventures that engage the players with more than just hack and slash, although there’s still plenty of that. Sometimes, those adventures are good enough that I want to clean them up and publish them.

In writing fiction, you have a bit more freedom, but at times it can be harder for me to focus – like a kid in a candy shop, I sometimes don’t know where to start (or when to bring it to a close!)

If I had to choose, I think I prefer writing fiction simply because I have greater latitude to explore themes and ideas that intrigue me.

Big thanks to Bill for taking the time to answer the questions! You can find him online at his website, on Instagram and Twitter, and at DriveThruRPG. Photo credit for Bill’s portrait is to Amy Atalla Hill, Shine Photografx.

Next week Christmas arrives early at Five For Writing with an interview with the renowned science fiction, fantasy and horror author Maurice Broaddus. Tune in and check it out!