Nicholas Kaufmann is a Stoker, Thriller and Shirley Jackson Award nominated writer. His works include General Slocum’s Gold, Dying Is My Business, and the bestselling 100 Fathoms Below (co-authored with Stephen L. Kent). His newest book, The Hungry Earth, is just out from Crossroad Press. Nicholas was kind enough to take some time to answer the five questions, so without further ado, here is Five For Writing with Nicholas Kaufmann:

END_OF_DOCUMENT_TOKEN_TO_BE_REPLACED 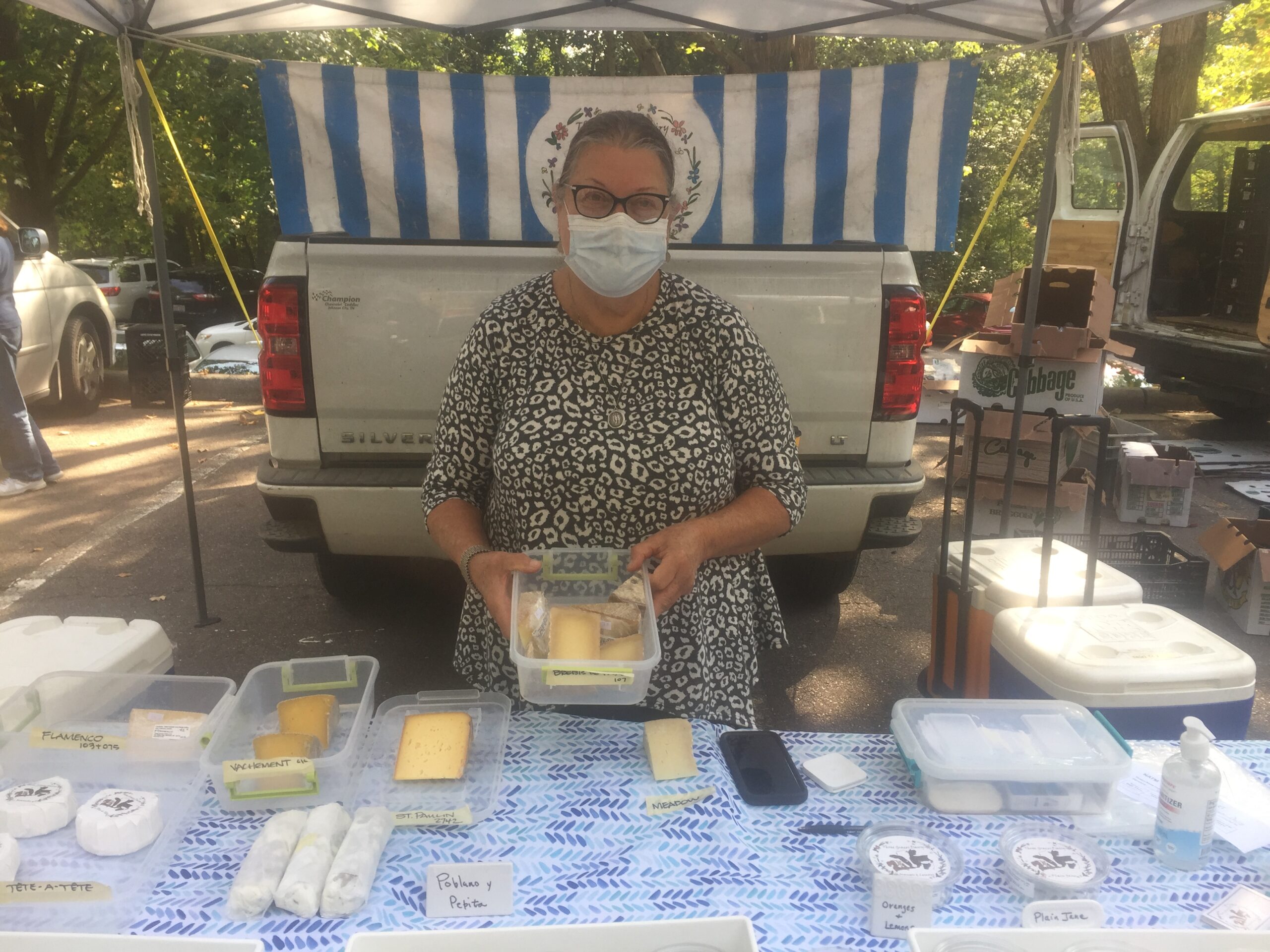 This weekend was spent with friends in the tourist hub of Asheville, NC. We were up there to hang out of course (and try a couple of the legendary local restaurants and pie joints), but also to try to make some stops on the Western North Carolina Cheese Trail. What is a cheese trail, you ask? It’s a collective effort of a bunch of creameries to provide cheese-minded individuals like myself with a map to local cheese and related stuff production in the Western NC area, enabling us cheese hounds to do cheese tourism by making appointments at the creameries to take tours and suchlike. There’s a comparable trail primarily in the eastern part of the state called simply the North Carolina Cheese Trail, presumably because it’s got some members to the west, but that’s neither here nor there.

We started our cheesy journey at the North Asheville Tailgate Market, because we  had good intelligence that several of the cheese trail members would be in attendance. This intelligence turned out to be correct, and we collected seven cheeses ranging from a Havarti-like “Mountain Dane” to the locally made feta, We also picked up side dishes for our incipient cheesy feast. And some cookies, because, well, cookies.

While we were purchasing cheese we mentioned our quest to one of the cheesemongers. He suggested two creameries that might be open for tours, and specifically instructed us to call ahead at one of them. So we did, and no one answered. So we went to the other one, which was waaaaaay out a narrow, twisty, windy bit of mountain highway. But we persevered, only to see a sign when we got there saying “Appointment Only”.

Disappointed, I went to turn around, and a woman came out of the creamery’s cheese store. She told us that there were two people on the tour already, so we could all come along.

So we did, and we tasted delicious goat cheese, and met some goats.

And after that, we were all cheesed out (as opposed to being cheesed off), so we headed back into Asheville from the lovely Round Mountain Creamery, and got on with the rest of our weekend.

As for the cheese, we had it for dinner, though the concept of using a lazy susan as a Wheel of Cheese (as opposed to a wheel of cheese) got dangerous when some of the goat cheese came flying off it.

Clever readers will note that we only made two stops, as opposed to the seventeen or so listed on the trail web site. And that’s OK. We got plenty of cheese, talked to plenty of cheesemakers, and got to pet goats. All in all, a very enjoyable sojourn.

But don’t just take my word for it. If you’re ever in Asheville, go hunt some cheese yourself. You’ll be glad you did.

The cover for GHOST OF A MARRIAGE, that is. It is gorgeous and I will share it with all of you as soon as I can.

Yom Kippur is a day of reflection. You’re supposed to spend the day thinking about the wrongs you’ve done over the past year, and trying to find ways to be better.

This year, I didn’t go to synagogue, for reasons that are long and boring and ultimately unimportant. As my niece Paige puts it, you can talk to God as easily in a forest as in a synagogue. Well, maybe she doesn’t put it quite that way, but the sentiment was there.

Instead, I spent the day at home in contemplation. There was a lot to consider – moments when I was less than kind, when I was  jealous of friends’ success, when I didn’t reach out to help when I could have. Hopefully I will do better in the coming year.

And one of the things I vowed to do was be a better writer. Whatever you think of my writing, I like to feel I have been given a gift, and I have spent too much time squandering it. This year, I hope to truly earn the title “writer”. I’ve already cranked out one story, but that’s just a start. Here’s to a year of better writing, and of being a better person for it.

Had a great time today on the WGGB online panel on transmedia. Big thanks to my fellow panelists -Leah Muwanga-Magoye, Corey Brotherson, and Mikko Rautalahti, as well as superb moderator Antony Johnston. And finally, a thank you to Andrew Walsh for putting the whole thing together. It was a great conversation with some extremely practical takeaways for those of us who dabble in transmedia work (like me – or have you forgotten that Ghost Recon novel so soon?) There were excellent questions from the audience, which always helps one of these things move along. As for me, the takeaway I’ll carry with me is Leah’s insistence that you know your medium – sound practical advice that too many people forget when the rubber hits the road.

Thanks to anyone who came out and joined us, and if you didn’t but would like to catch up, hopefully this will be posted (minus the technical difficulties at the beginning) soon.

I’m very happy to announce that my story “Unhaunted House” is up and available for listening at PseudoPod. The fine folks there do a wonderful job of picking horror fiction for your listening pleasure, and I’m honored they’ve selected a story of mine for the third, yes, third time. So give if a listen – it’s a short one – and then look very carefully at your lawn before you mow it again.

So this is it, my redesigned web page. Welcome one and all, and I hope you find the content contained herewithin to be reasonably amusing.

As for myself, I’m Richard Dansky, scribbler of various things. For my day job, I write and videogames for Ubisoft. Some of them, you might have heard of – Tom Clancy’s The Division and The Division 2, for example. Anyway, I’ve been writing and designing video games – mostly writing these days – for 20+ years at the Red Storm Entertainment studio. I am humbled by some of the great folks and studios I’ve gotten to work with, and I’ve had a chance to write for franchises including Rainbow Six, Ghost Recon, Far Cry, HAWx, Might & Magic, and Driver.

I’m also a big proponent of supporting the video game writing community however I can. Among other things, that means serving on the Advisory Board for the Game Narrative Summit at GDC, and serving as the judge for the Student Narrative Competition at that show. I also curate the narrative programming track at East Coast Game Conference in Raleigh, NC every year, and I’ve contributed to several books on video game writing.

But that’s the day job. By night I write fiction, mainly horror. I’ve published seven novels and one short fiction collection, which has a cover by brilliant Sandman and Doom Patrol artist Richard Case. My most recent novel is Ghost Recon: Wildlands: Dark Waters, a tie-in to the video game Tom Clancy’s Ghost Recon: Wildlands. But if like ghost stories about video games or haunted farmhouses, I’ve got something for you as well.

Before getting into video games, I worked in the tabletop RPG industry with White Wolf Game Studios. At this point I have over a hundred credits for projects I’ve written, designed, or otherwise contributed to in the Classic World of Darkness and Aeon universes. I mostly worked on Wraith: The Oblivion, but you can also find my work in Vampire: The Dark Ages, Vampire: The Masquerade, Werewolf: The Apocalypse and several other games. Most recently I wrote for and developed Wraith: The Oblivion 20th Anniversary Edition, of which I am inordinately proud.

And that’s me professionally. Personally, if you keep reading in this space, you’ll probably hear a lot about the following topics: single malt scotch whisky, sasquatches, baseball, and crazed attempts to make sorbet in the middle of the night. If that sounds like your kind of thing, stick around.